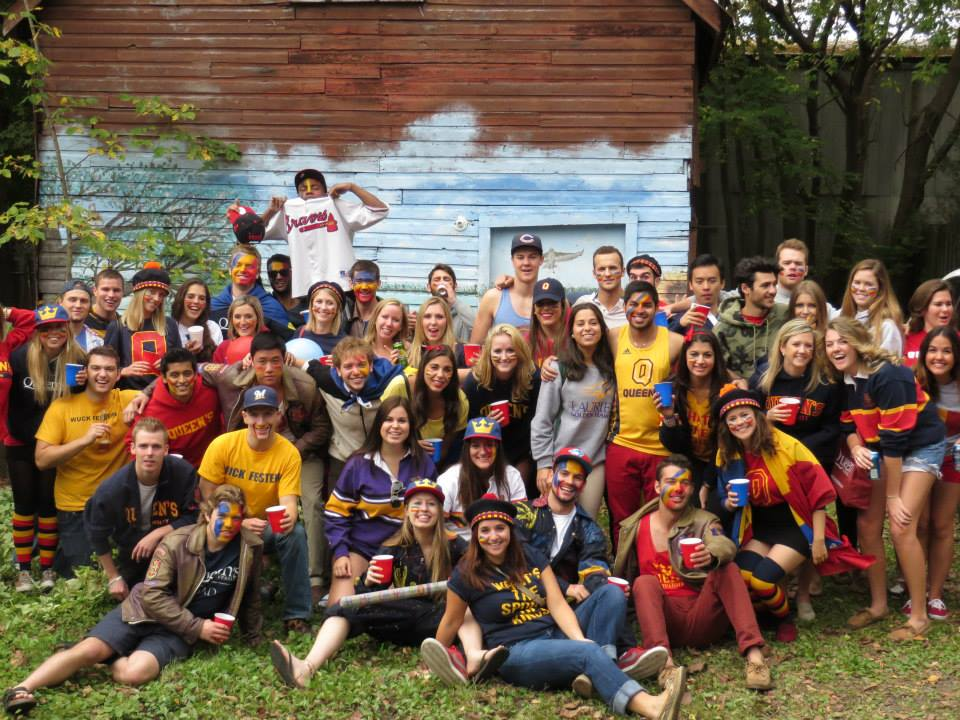 As a grown man I sometimes feel weird being so invested in the success of my favorite professional sports teams. Especially the ones that are not based out of Toronto or even Canada for that matter. As I have no real connection to them as most of my favorite players from my childhood have since been traded away or retired.

Falling in love with sports at an early age for me was easy, as my dad is a lover of most sports an avid cricket player and played pretty much every year of my life, well into his 60’s. As for my mom, she is as competitive as ever. Give her a chance for her to beat you or prove you wrong in something and she was all in.

By the time I was 6 years old, just starting to play baseball. After watching my older brother play for as long as I could remember. I fell in love with the game. Outside of watching the Blue Jays’ games as a family. I was also able to catch Atlanta Braves games on tv and I quickly fell in love with the team. Being born in 93’, by the time I was 6 I had already heard all the stories of the 93’ and 92’ Playoff runs 10000 times. That same year, the fall of 99’, with buzz of the end of the world about or Y2K. As a six-year-old all I was focused on was seeing the Braves win a world series. As a kid I didn’t get to watch many games to completion. First thing in the morning, it was always a beeline to the front door or living room to find that day’s copy of the sports sections to check the standings to see if the Braves had won. The 99’ season should have been an eerie foreshadowing of what it would be like to be not only a Braves fan but a fan of Atlanta sports teams. As the Braves lost handily to the Yankees in 4 games with game 3 being the only close game.

Starting up a Rally

The word fanatic perfectly describes what most sports fans are but won’t admit too. In both senses of the word. Instead they save fanaticfor that Bills Mafia super fan that loves getting put through tables before Bills games to hype up other fans. Or the fan that will not wash their team jersey for good luck during a playoff run.

Having lived away from home for post-secondary school, both on and off campus. I got a pretty good first-hand experience of a wide array of sports fans from all walks of life. A Lot of things were different, but a few remained the same. Regardless of the sport being played. Or the gender of the fan, you could always find fanatics. I am not sure how it is for most. But for me, I have seen more than my fair share of fights that started with a sports argument. Whether it was, player A is better than player B. Or team A is better than Team B. Or how could you like team A more than team B?  For one reason or another the arguments begin and end in disaster.

Hitting Too Close To Home

Does having sports so heavily involved in your life make you immature in a sense? That’s the question I asked myself as I lay sleepless after the Braves loss in game 7 this weekend. After being up 3-1 and in control at many different points of the last 3 games. Sadly, this is a spot I have been in many times before. Especially over the last 5-10 years or so. It did not make this time any easier. In fact, it made it worse. At no time until the Braves lost game 7, did I think it was possible for them to mark themselves on that side of the baseball history books.

Growing up loving the game of baseball, it was easy to fall in love with some of the unwritten rules and curses that baseball purists over the years have coined. A starting point of my journey as a sports fan that led me to this heartbreak. The curse of the Bambino was something that haunted Redsox Fans for what felt like a lifetime leading up to the 2004 American League Championship series. If you are not familiar with what I am talking about. In 1918 The Red Sox’s sold Babe Ruth (one of the Greatest players of all time) to the New York Yankees and for the following 86 years they never won a world series. Leading some sports fans to call the team cursed. Well in 2004, the unthinkable happened and the team became the first in history to come back from a 3-0 deficit to beat those same Yankees and sweep the Cardinals in the world series thus ending the curse. In jest this would mean nothing, but my older brother Ryan is a Redsox fan. Up until that point as an 11-year-old, I was as annoying as I could be. Letting him know at every chance his team sucked and we got to bear witness to it. You would think the events that transpired would humble me moving forward. Unfortunately, they would not.

The next series of events are oddly related to the first. With my brother being such a big Redsoxs fan, in an attempt to annoy him at every turn. I started to support the Chicago Whitesox. In turn meant my support for the Chicago Cubs was little to none. These facts only matter, to set the stage for the second and  one of the more recent 3-1 breakdowns that has led me to this point. In 1945, during game 4 of the world series, local Tavern owner William Sianis was asked to leave the game because his pet Billy Goat was bothering spectators. Upon leaving he proclaimed, “Them Cubs,they ain’t gonna win no more” and for the next 71 years the Cubs failed to make the world series. Until in 2016, with the Cleveland Baseball team up 3 games to 1. The Cubs battled back to win the world series. At this point, as a self-proclaimed baseball purist at 22 years old and being slightly superstitious. I began to believe that maybe I was the curse or something I did prior to watching. Or in a way I showed my support. Something other sports fans can relate too.

This last one is the most painful to date. Really stung but even still. I had been a fan of Kevin Durant from the moment he was at Texas. The moment he got drafted by the Seattle Supersonics I was locked into that franchise. The following year when they picked up and moved to Oklahoma City, I was right there behind them. The Sonics/Thunder had been bad, really bad but I still stood strong in my support. Now years later, on the brink of the finals for the second time in five years. I took it as a positive step in the right direction. Poised to be able to lock Kevin Durant in long term in the 2016 offseason and be ready to be a top contender in the league over what I thought would be the next 4-5 years up until this point.

Heading into the 2016 NBA playoffs with the OKC Thunder up on the 73-9 Golden State Warriors 3-1 in the Western Conference Finals. Similarly, to the Braves in 2020. The thought of them blowing this series did not even cross my mind. But it happened and KD left. At this point, I don’t think I had ever been as heartbroken as a fan. Maybe as a kid when I found out Vince Carter sold out the Raptors in a late game play, in an attempt to force a trade. But at this point it was so long ago and I had moved past that in a sense.

Like I mentioned earlier, besides the Jays the Braves were my next favorite sports team. I have followed them ever since that 1999 world series run. The last time the Braves had won a playoff series before this year was 2001. Something as a fan I didn’t even notice. I knew we made the playoffs most years. For the first 12 years of my life the Braves won their Division every year as well. It was when someone mentioned that we had not won a series in almost 20 years, prior to beating the Reds in the first round. That I noticed the Braves were the textbook definition of a treadmill team. So much so that I didn’t even realize that they had been so far from postseason success for so long because of how dominant they were in the regular season, winning trades and developing players. Once we took down the Reds, then the Marlins, then got up 3-1 on the Dodgers, none of that mattered again. It seems like I would be able to celebrate like it was 1999. Just like the situation with the Thunder, this Braves team is well ahead of schedule. In terms of when most experts thought they would be able to compete. On one hand the future has and seemingly will always be bright for the Atlanta Braves. On the other hand, I have been here so many times before that it is very hard to lock in and stay positive on that type of mindset.

I don’t think I will ever be able to, nor want to cut sports completely out of my life. What I do want to try and do is change the way I consume it, as well as the way I let the outcome affect me. Being an avid sports bettor and Fantasy sports head. and a fanatic of one certain team or player can really be detrimental to your objective decision making in both activities. With almost all my other attachments, even the Toronto Bluejays or Toronto Raptors, none is harder to break than my attachment to the Braves. I am not sure if it is because they never really saw the low points that the Toronto teams did, as such I was able to lean on the Braves in the other teams’ down years. Or that being from Toronto, I have never met that many Braves fans. Kind of having it as my own in a world filled with other fanatics felt special. Even with all that said, I am going to try and take a step back from supporting any team that is outside of Toronto. For the simple fact that even if they do win, I cannot participate in the championship parade. After going to the Raptors Championship parade in 2019. It is an excitement I will forever chase.

Last mix of the year

225 for 2 . Working back up 255 one rep max . Currently at 240. Been a long road of injuries and health issues since the end of august . Still on track to try and hit 300 one rep bench by July.
#ufconabc1 Max is still a dog , excited for this card !
First post of the new year ! Link in bio#nets #houston #nba
Did a quick overview of 5 projects I have enjoyed that came this past week. Link in bio! Playlist will be in my story
Some quick game recaps and highlights of my favourite performances in the nba last night . Link in bio ! #nba #denvernuggets #neworleanspelicans #bostonceltics #hornets #wasingtonwizards #atlantahawks
Lmfao big throw back #tbthursday