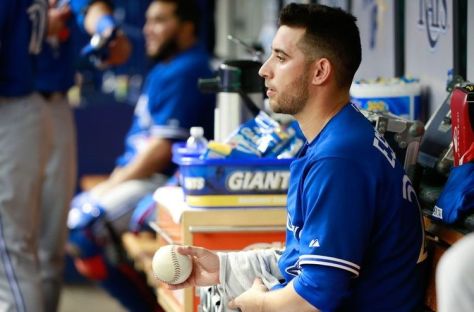 4 wins down, 8 to go for the Jays on their path to a world series championship. After making quick and easy work of the Texas Rangers the next team standing in their way of advancing is the Cleveland Indians.  Cleveland was able to down the Jays in the regular season series 4 games to 3 but coming into the championship series the Jays are the favorites to advance. For many Toronto Sports fans, a series win here would bit of revenge for the Eastern conference finals loss the Toronto Raptors were handed by the Cleveland Cavaliers during this years Nba playoffs.

Just like in the Texas series the Jays hold the Starting pitching advantage. To date in this post season the Jays pitching staff has held opponents to a .179 batting average and have only walked 8 batters compared to the .214 and 21 walked batters of the Indians pitching staff. Unlike the Rangers, the Indians have 3 quality starters with Corey Kluber who pitched 7 shut out inning vs the Redsox last time out, taking the mound tonight against Marco Estrada for the Jays. Both pitchers preformed admirably last time out so the pressure is on each team’s offence to see who can make a chip in the armour first.

The Bluejays Bats have been red hot to start the post season. Josh Donaldson, Edwin Encarnacion, Jose Bautista and Troy Tulowitzki had lead the charge with 20 of the Jays 27 runs batted in between the 4 of them. Which is 5 more than the whole of the Indians lineup during the post season. The top 4 of the Indians line up do all the lifting on offence where as, the bottom of the lineup has done a great job of getting on base and into scoring position to allow the big bats of the Jays to clean up nicely.

Game 1 is where the tone of the series is set and I believe if the Jays can get to Kluber early it will strike fear into the hearts of the rest of the Indians pitching staff for the rest of the series. The Indians are a good team but if the Jays bats stay as hot as they are and the pitching staff stay as solid as they have been I don’t think any team in the majors aside of the Chicago Cubs can handle the Jays in a win or go home 7 game series.

Last mix of the year